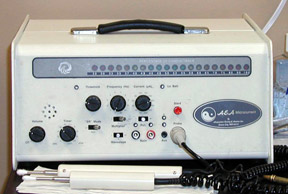 Dr. Richard Snow of Overland Park, KS is a Certified Diplomate of Chiropractic Acupuncture. He interned under the famous Dr. Richard Yenni of KC, MO.

Dr. Snow not only uses needles but also uses electroacupuncture in treating many patient conditions.

Electroacupuncture is an exciting revolution currently taking place with our ability to use electricity to speed recovery from injuries and relieve pain.  This revolution is an extension of an ancient tradition. Electricity has been used by healers since antiquity.  Innovative Greek physicians used local application of live electric eels to produce pain relief.

The effectiveness of this minimal intensity electrical stimulation is quite remarkable, and represents a quantum leap forward over previously available forms of transcutaneous electrical nerve stimulation (T.E.N.S.) and Electro-Galvanic Stimulation (E.G.S.), which use high intensity direct current milliamperage stimulation.  This presynaptic feedback inhibition may also be enhanced by the secretion in the CNS of endorphins and enkephalins, the body's naturally occurring narcotics.

M.E.N.S. gains Media Exposure through sport injury successes. Minimal intensity micro-stimulation has added a while new dimension to electrotherapy.  Now, instead of simply masking pain, we may have a way to electrochemically fuel the body's natural healing mechanism, often producing dramatic recoveries form painful injuries.  Such treatments have gained national headlines when world-record runners such as Joan Benoit and Mary Decker used micro-stimulation to recover from injuries sustained before the 1984 Olympic Games.

How Electroacupuncture Can Help You

Rapid resolution of painful swelling, inflammation and associated limitations of movement can be expected in most acute cases treated with micro-stimulation.  Impressive results are also often obtained with chronic injuries, often to the amazement of all.  A full 80 - 90 % of the patients treated with micro-stimulation can be expected to have excellent results.

Current research findings substantiate M.E.N.S. Skeptics sometimes ask for research documentation to support the many anecdotal reports regarding the efficacy of micro-stimulation.  That piece of the puzzle was nicely supplied with the appearance of an article in the Aug./Sept. issue of the California Health Review.  The article was entitled, "A Double-blind Comparative Study of Micro-Stimulation"  by F.P. Meyer, MD, et al.  This study was very revealing and provided a documentation regarding the cumulative effects of micro-stimulation.  Patients received 16 treatments within eight weeks, either actual micro-stimulation or placebo.  After this series of treatments, the real treatment group achieved an average pain relief almost 40% greater than the placebo group.

The gains achieved by the real treatment group were maintained during the eight week follow-up period, with no further treatments required.  The final results at the conclusion of the eight week follow-up period were most impressive indeed - an average pain relief in these chronic low back pain patients of 75% (3/4 of their original pain was gone!)  versus only 6% pain relief in the placebo group.  This study supports the contention that micro-stimulation produces electrochemical changes in the body that sets the stage for healing.

Dr. Wing surmounted this problem with the development of a unique type of electrical wave which research demonstrated was able to effectively penetrate skin resistance.  This wave form was termed the "electrically simulated tidal wave"  (E.S.T.W.)  because of its similarity to a tidal wave pattern.  It is so unique that Dr. Wing was able to obtain a U.S. Patent on it recently.  Dr. Wing's instruments, My-O-MATIC/MENS-O-MATICS also enable the practitioner to monitor changes in skin resistance during treatment and gauge when the desired penetration has taken place.

Excerpt from The Digest of Chiropractic Economics, "THE REVOLUTION IN ELECTROTHERAPY".